The future is light and agile. 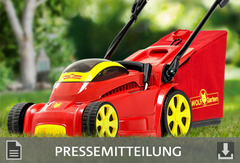 It is the classic mishap: cutting the cable with the lawnmower or the hedge trimmer. Just a millisecond of inattention - and it has happened. So it is no wonder that an increasing number of garden tools now run off batteries. There is no stopping the inexorable advance of cordless devices. But the annoying mess with cables is not the only reason why cordless lawnmowers are very popular.
These lightweights are heavy contenders because they are handy, agile and yet offer very high performance. WOLF-Garten offers a comprehensive range both with fixed power packs and replaceable power packs for this up to date type of garden work with cordless electric motors. The German company with a long tradition is now introducing three new products to the 72 V series of lawnmowers in the form of the 72 V LI-ION Power 34, 37 and 40. "Demand in this segment is increasing all the time," reports Wolfgang Rill. And the managing director at WOLF-Garten for the German trade knows very well: "Each year we see double-digit growth in cordless tools. Lithium-ion power packs have long been more than just a fashion. It is far more the case that they are becoming the determining technology."

Models in the 72 V LI-ION POWER series are the optimal choice for areas of up to 350 m2.
The 72 V system paired with the high-quality lithium-ion power packs lend these lawnmowers exceptional power and endurance. The 72 V power pack with quick-charge function is fully recharged in about an hour.
"It takes no more than 45 minutes to charge to 80% of capacity - and this makes it one of the fastest in the garden tools market," explains Wolfgang Rill. And the running time can be increased as desired through various replaceable power pack systems. It is always possible to tell the charging status of the power pack from the status indicator lights in green, yellow and red. In this way the new lawnmowers are always ready for use. The 72 V LI-ION Power cordless tools from WOLF-Garten are especially suitable for older people or women – or also simply for people who value convenience and simplicity. The 72 V LI-ION Power 34 is an absolute lightweight at just 14 kg that can be pushed and transported with no problems. Additionally, the 72 V LI-ION Power 37 model weighs in at only 17 kg and the 72 V LI-ION Power 40 at just 18 kg. A further plus point is that the mowers are easy to maintain and keep clean. You have no stress with them, and there is no time-consuming maintenance either. It is very easy to stow them away in a shed or garage with just a few actions.

The new ones give their best

If it is a question of going around a flowerbed, a bush or trees - then the cordless lawnmowers are in their element in gardens with a winding layout or on planted areas. They allow a whole new level of freedom of movement. Where you previously got stuck with a cable, you can now get around trees or plant tubs with ease. The constant tugging on and straightening out of the cable is now a thing of the past. The new 72 V models cover all possible mowing options through the built-in CCM system: cutting, collecting and mulching. You only need to operate the CCM lever to switch between these options. In addition, the 72 V LI-ION Power cordless lawnmowers are equipped with the Advanced Cut & Collect system that enables the best cutting and collecting results. The grass stalks under the blades are aligned with the help of the aerator wheel to give even cutting results. The suction effect of the air flow prevents any blocking of the discharge duct and at the same time ensures that the catch basket is filled optimally. Thanks to this function, the catch basket needs to be emptied less often. "You can work in a flexible way because you do not have to rely on being near to a power socket. The quiet running is good for your ears. No bad smells, no smoke, no petrol vapour. No irritating engine noises. It lets you work without getting tired", says Rill to sum up That is how to mow lawns today.

Picture captions:
The pictures are free. WOLF-Garten can be quoted as the source for all pictures.

Bild1_72VLI_ION-Power: Handy, agile and extremely powerful. These are the convincing arguments for the three new 72 V LI-ION Power lawnmowers from WOLF-Garten.

Bild2_72VLI_ION-Power-Knopf: The lawnmowers of the 72 V LI-ION Power series are absolute lightweights that can be pushed and transported with no problems It is also very easy to change over the power packs.

Bild3_LI-HI ENERGY_Akku: The 72 V power pack with quick-charge function is fully recharged in about an hour. It takes no more than 45 minutes to charge to 80% of capacity - and this makes it one of the fastest in the garden tools market.

<- Back to: Promotions & new items
back-to-top